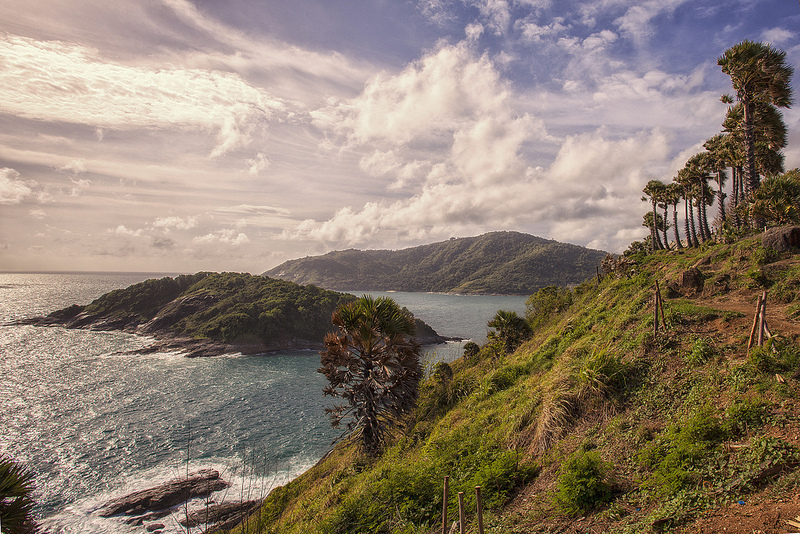 (photo made by Dimitris Christopoulos )

If you are planning your visit to Phuket and you still haven’t chosen your travel dates. Perhaps this small article will give you food for thought. There is a number of remarkably authentic festivals running on Phuket through the year.  It would be a good idea to visit one of them.

Here it is – three the most famous Phuket’s festivals.

The vegetarian festival in Phuket 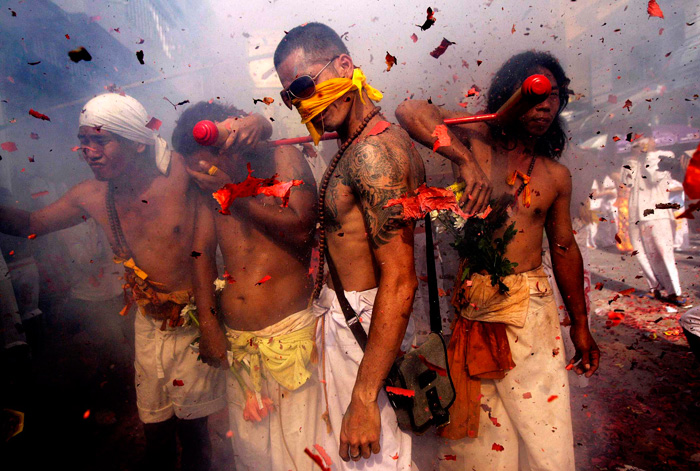 Phuket Vegetarian festival is a very colorful event on this island. It is an annual festival, and the most famous and important days for Thai Chinese who live on this island. The event lasts for a period of 9 dayson the Nine lunar month of the Chinese calendar. The origin of this festival is not clear. It is commonly believed that the festival was brought to Phuket by a wandering Chinese opera group who fell ill with malaria while performing on the island, and then they decided to follow strict vegetarian diet and pray to the Nine Emperor Gods to ensure purification of the mind and body. To the amazement of everyone the opera group made a complete recovery. From the 19th century till date, the festival has grown and developed into a very spectacular yearly event.

The people celebrate this by holding a festival that is meant to honor the gods as well as an expression of the people’s happiness and survival. During the festival, the people will eat vegetarian foods, clean the body, wash the kitchen utensils which shouldn’t be used by those who did not participate in the festival, avoid sex, avoid alcohol, wearing of white color clothes and going to pray or participate in the Chinese temples nearby. Everyone can participate in this festival except the pregnant women also those menstruating should not attend thisceremony. The highlight of this festival includes various, fire walking, body piercing and the others acts of self- mortification undertaken by participants acting as the gods. It is believed that the Chinese gods will protect such persons from harm.

The celebration of the festival takes place at the six Chinese temples. The main one is JuiTui Shrine which is not far from the fresh market in Phuket town.

The event starts from with the raising of the lantern pole which is a notification of the Nine Chinese gods and that the festival is about to begin. For the next few days, the local people bring their household gods and the offering to the temple. It is believed that the household gods will benefit from an annual injection of the spiritual energy that fills the temple.

At the end of the festival, all the Chinese temples will take part in the display of performance and straight to the Chinese Temple at SapanHin which is the place to send all the Chinese gods back to the haven. 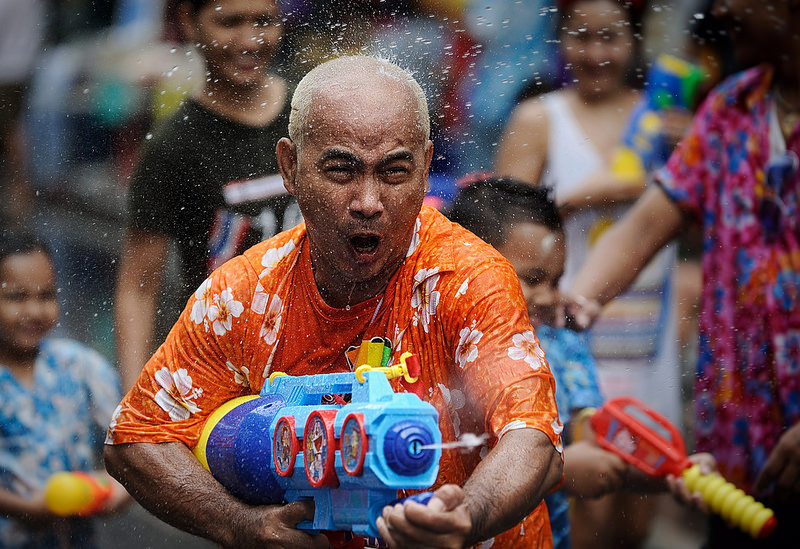 (photo made by Vichaya Chatikavanij )

You are welcome to Thailand; enjoy the Thailand water festival on the month of April, away from the heat of the summer. Songkran, this word from the Sanskrit language means passage of the Sun from the sign of the Zodiac to the other sign. As far as history is concerned this festival is not just to enjoy but it is a meaningful family event for Thais in the whole country. It still varies from region to region and also focuses on enriching religious intention. Songkran is being celebrated for 3 days, starting from April 13 to April 15. The first day of Songkran is on the 13th, it was the official New Year for Thais until 1888. Today, Thais has changed it to be celebrated on January 1. On the first day, people starts their day with cleaning their houses, washing every Buddha statues in the house and in the temple and bringing the offering to the temple with the wearing of new clothes to meaning  good luck for the coming  new year. Then at the end of the procession in the temple, they will start pouring water oneach other. The second day is April 14; this is a very important day to the family, so this is to the reason why Thais go back to their hometown more than others for festivals. And the last day of the festival is April 15; this is the day to celebrate with the family, relative, friends or neighbors.Thais usually party or go to visit their relatives, friends and travel somewhere together.

How to Celebrate – Water Fighting

The most famous aspect of the SongKran celebration is the throwing of water. People walk to the streets with containers of water, using the bowl, water guns at the same time; you may get covered with the powder which is mixed with water. So, fun time begins then until late in the night.

In Thailand, there are top 5 provinces to visit in the Songkran festival; Bangkok in Khao San road; Chiang Mai; Pattaya and Phuket.

Phuket Songkran festival starts from the night of April 12.Tourists and local people will go to the walking street in Patong beach, well known as Bangla Street. The water fighting begins from then until the last day of the festival on April 15. Taking place once in a year, this festival is an event that everyone shouldn’t miss it.But before anything else,you must prepare the stuff to protect your things from the water like a waterproof bag or even the plastic bag, so then just have fun with it! 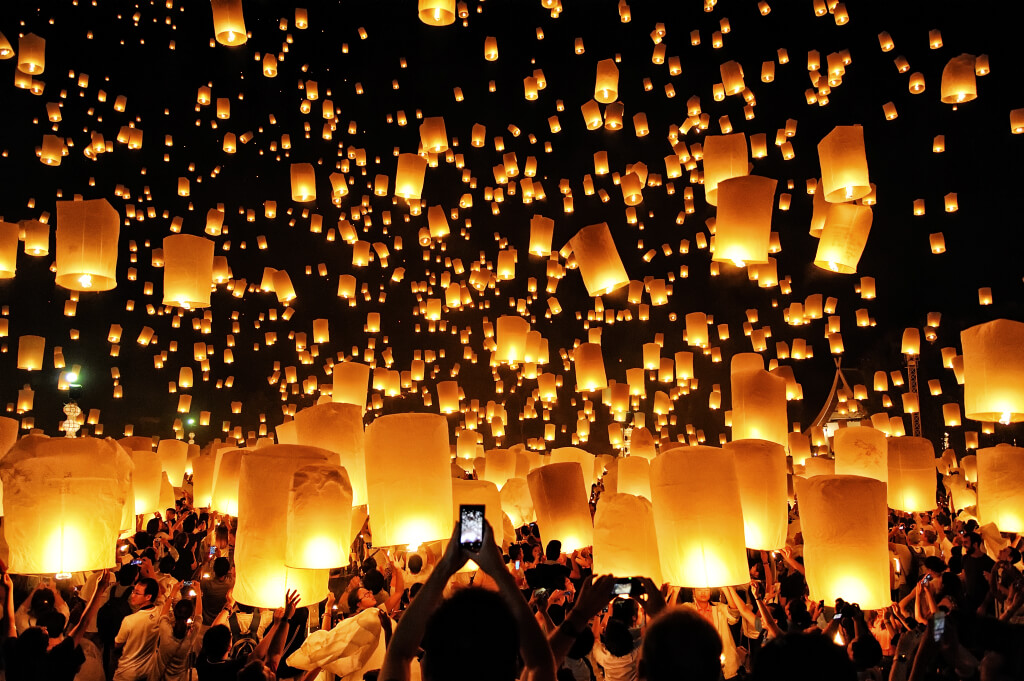 The festival is celebrated annually throughout the southwestern Tai; Thailand, Laos, Shan, Taninthary, Kelantan, Kedah and Xishuangbanna. The festival originates from an ancient ritual that involves paying respect to the water spirit.

Loy Krathong festival involves floating a basket. It will be celebrated on the 25th of November this year 2015. This festival takes place in the evening of the full moon of the 12th month in traditional Thai lunar calendar. On the night of the full moon, Thais launch their Krathong on the river, canal, lake or a pond. Krathongs are made from a slice of the trunk of a banana tree or a spider lily plant.Modern Krathongs are more often made of bread. A bread Krathong will disintegrate after a few days and can be eaten by fish. BananaKrathongs are also biodegradable.Styrofoam Krathongs are not used anymore because of its pollution and it takes years to decompose.A Krathong is decorated with elaborately-folded banana leaves, incense stick, candle, coins and pieces of hair and nails. Coins are offered to the river spirit and pieces of hair and nails are meant to float the bad luck away from life and make a wish for happiness.

On Phuket Island, Loy Krathong festival takes place almost everywhere at water area, the sea or a lake  such as the Patong beach, Phuket town at Sapan Hin. But the most popular place is at the Karon beach which is the official place to enjoy this festival with the local and tourists. The event will start 7days before the night of full moon. And on the last day is the day for Loy Krathong and also with the beauty contest called Nang Noppamart or Queen of the contest.