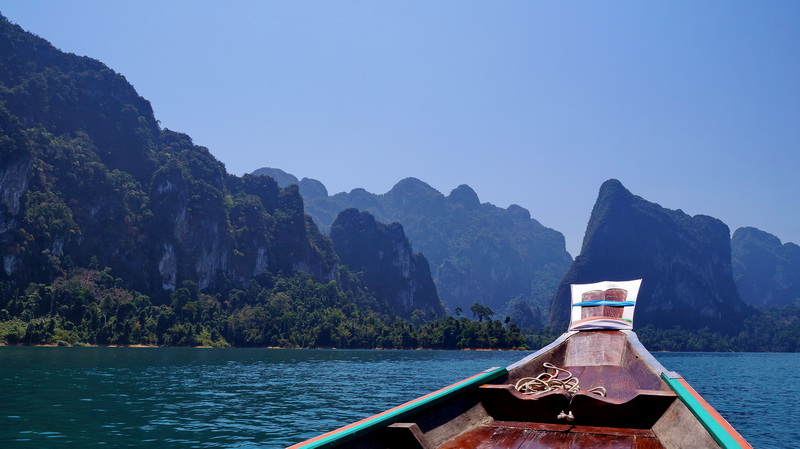 KhaoSok National Park located in Surat Thani Province in Southern Thailand is not only the oldest evergreen forest in the world, it is home of one of the most beautiful artificial lakes you would ever hope to experience.

The lake encompasses 64-square-miles of amazing beauty, from its limestone cliffs to the evergreen rain forest that is estimated to be over 150 million years old. 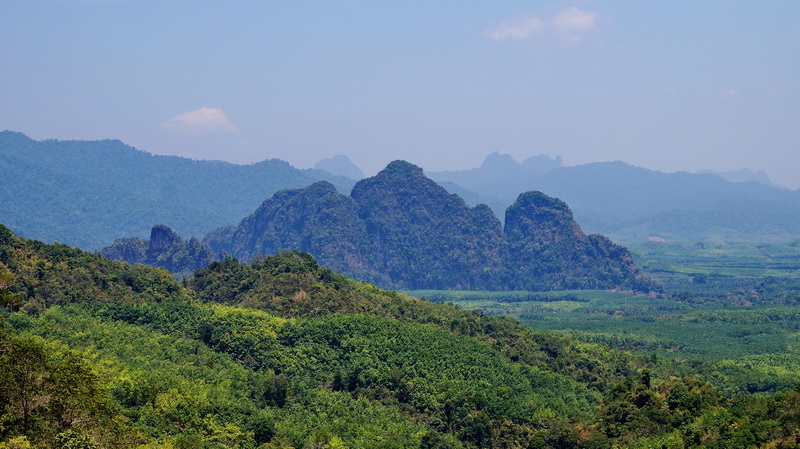 The History of CheowLan Lake

CheowLan Lake also known as Rajjaprabha Dam, was built in 1982 by the EGAT (Electricity Generating Authority of Thailand) to be used as an electricity source. Meaning “the light of the kingdom”,Rajjaprabha Dam received its name in 1987 on the king’s sixtieth birthday party from the king himself. Intended to not only project power generation, CheowLan Lake was also projected to aid in flood control, fishery and irrigation.

The project took close to a year to flood the 1780 square foot basin and the relocation and resettlement of the 385 families who resided in Ban Chiew Lan village. After the residents were resettled, multiple farming opportunities were introduced with training programs as well as credit facilities to help sustain the farmer’s income. Fruit orchards, rubber, poultry, reservoir fisheries and vegetable farming was the main farming options that were introduced to the resettled residents. 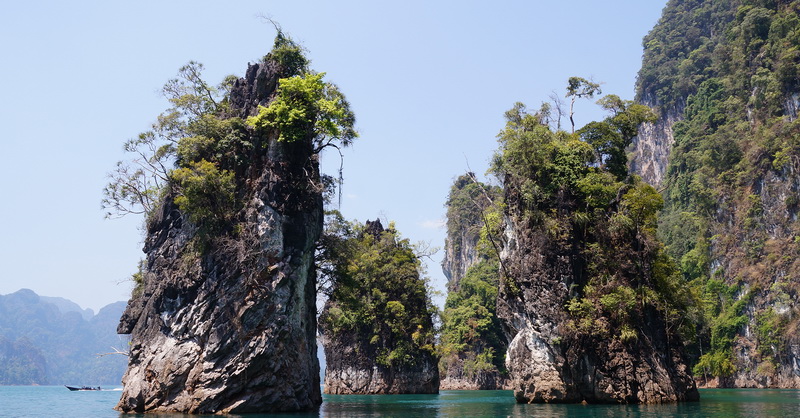 Every family was given 7.2 acres of a rubber plantation and 0.39 acres in exchange for their private homes, each family also received 1000 baht a month. This resettlement resulted in the creation of water supply systems, public buildings like a medical center, police station, and schools, all built by the Thailand government.

The animals there were native to the soon to be flooded area were also relocated by helicopter and boat to keep them from drowning due to the flooding or starving on the newly created islands.

The geography of CheowLan Lake consists of mud-stone rocks and gorgeous sandstone, with over 100 islands that dot the lake, many of them rise to spectacular heights above the surface of the waters. KhaoSok is crisscrossed by a mountain range of limestone from the north to the south with the highest point reaching 950 meters.

The mountain ranges experience the monsoon rains that come from both the Andaman Sea and the Gulf of Thailand, making it one of Thailand’s lusciously wet regions. It is this incredible amount of rainfall combined with the falling leaves that have led to the incredible and vast number of karst formations that are visible today. 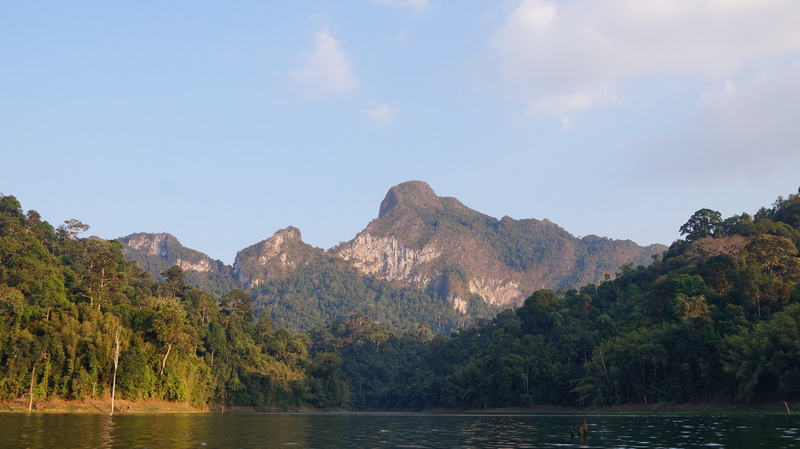 The park is a branch of the Khao Sok –Khlong Saeng Forest Complex, it includes 12 protected areas, some of which include some islands located offshore in the Andaman Sea. The park is also home to Thailand’s prevalent virgin forest with the oldest known evergreen rain-forest in the world.

Not only home to various exotic mammals including the Asian elephant and leopards, it is also home of the (wild lotus) Bua Phut, a flower that is quite large. It is called ‘symbolic floral of Surat Thani Province’ and can be found along the trails that begin from the main road south of the park. It is not only the world’s largest flower it is said to also be the heaviest and can weigh up to seven kg.

Aside from the brilliant and exotic wild lotus flower, you will also find an abundance of bamboo, ferns, lianas and palms including the rare Kerriodozaelegans. The Kerriodoza only grows in KhaoSok National Park and Ko Phuket. 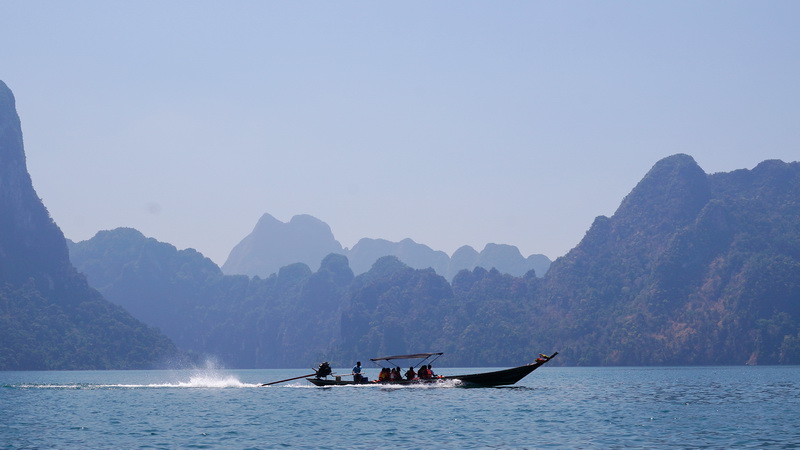 There are 180 different species of birds, including eagles, hawks, woodpeckers, multiple species of hornbills and kingfishers. You can also find osprey, and banded pittas. With 180 different bird species however it’s a great place for bird watchers to explore.

It is also home to a large variety of mammals, suck as the sunbear, Asian black bear, sambar deer, mouse-deer, porcupine, gibbons, and wild boar just to name a few. There have also been tigers seen in Khao Sok, but close to 50% of Thailand’s tiger population are in the Huai Khaeng Wildlife Sanctuary. However, that is not to say visitors won’t see a tiger while enjoying the Cheow Lan Lake area.

There are lots of adventurous and fun activities to keep even the most experienced tourist happy and busy. Experience a safari in the morning mist as you rise with the sun and take guided tour on a longtail boat as you get to see the local natives start their daily routines. You can enjoy the music provided the gibbons singing over head as you watch the Langurs catch their morning breakfast.

Explore the coral caves! After taking gorgeous and scenic hike through the lush forest, the park ranger ferry’s you by way of a bamboo raft to the 10,000 year old breathtaking Coral Cave. This is one of the top favorite activities for those who are on a family vacation and everyone regardless of age will love it.

Or how about an adventure to the KlongSaeng Wildlife Sanctuary? Discover the beautiful Asian elephants and get a glimpse of the endangered Asian bison and the tapir.

Take a wildlife fishing tour on the remote waters of Klong Morn and KlongSaeng. Both are the ideal waters for fishing.

There are some truly amazing things to experience when visiting CheowLan Lake and KhaoSok National Park.