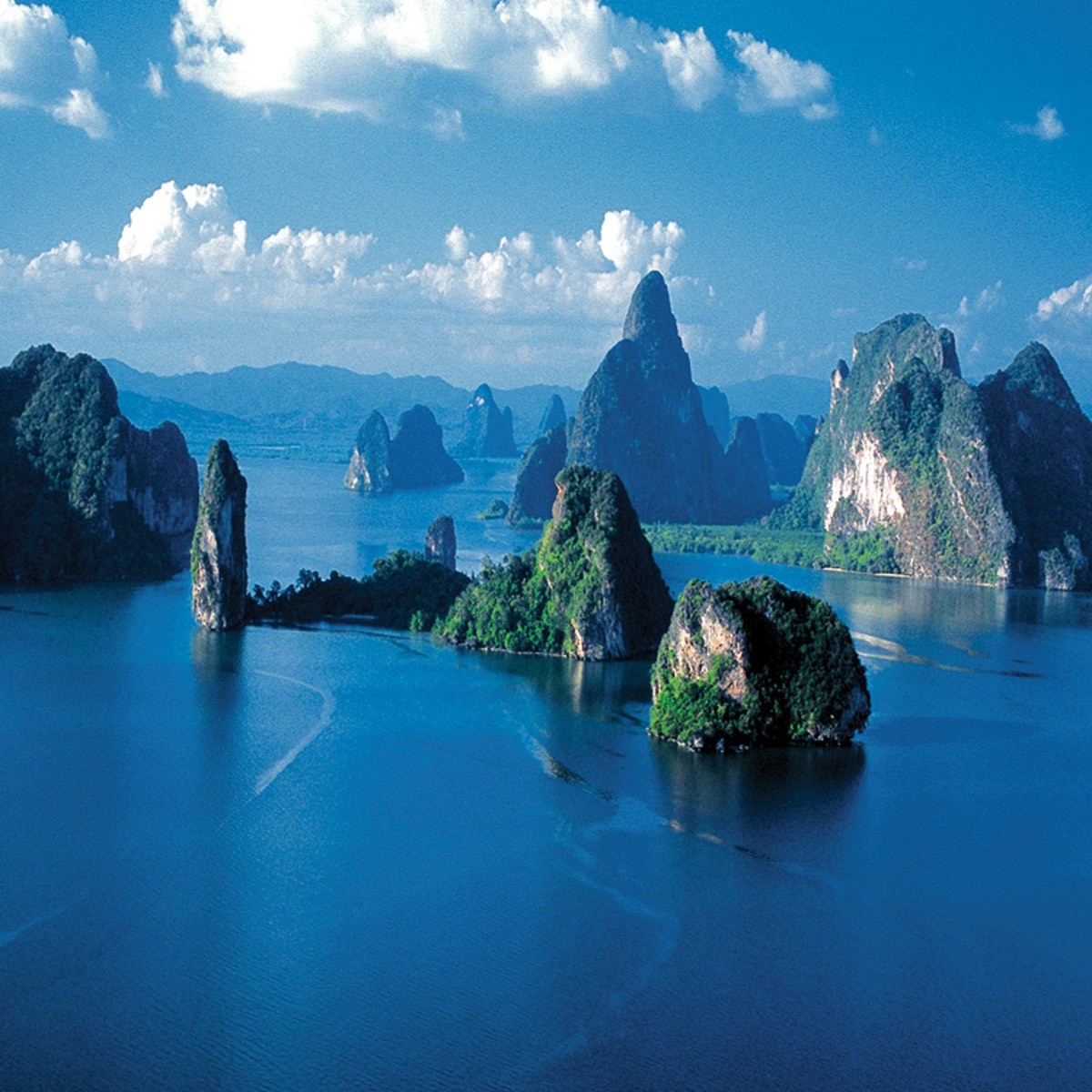 Phang Nga Bay is only a short distance northeast of Phuket. This truly amazing place is a National Park, famous for its astounding landscape. The bay comprises of over 40 islands. These are limestone rock islands, which extend spectacularly from the water and rise skyward, providing really astonishing view.

limestone islands extend out of the ground for a significant part of the coastline surrounding the bay. There are numerous stream estuaries towards the bay’s northern areas. The bay is protected from the waves of the rainy season and as such usually quiet all through the year.

In 1974, Phang Nga Bay became known to the world in the James Bond movie ‘The Man with the Golden Gun’, which highlights the bay at its peak. In the movie, Bond navigates a light airplane over the fantastic landscape, giving spectacular picturesque views of the area. He arrives at Scaramanga’s island where they fight across the shoreline and in a hall of mirrors. In Thai, the island is called Koh Pingkan, but due to its marketing opportunity, the Thais for the most part refer to it as the James Bond Island. The particular rock, known as Koh Tapoo, that in the motion picture houses a laser gun, is largely referred to as James Bond Rock. 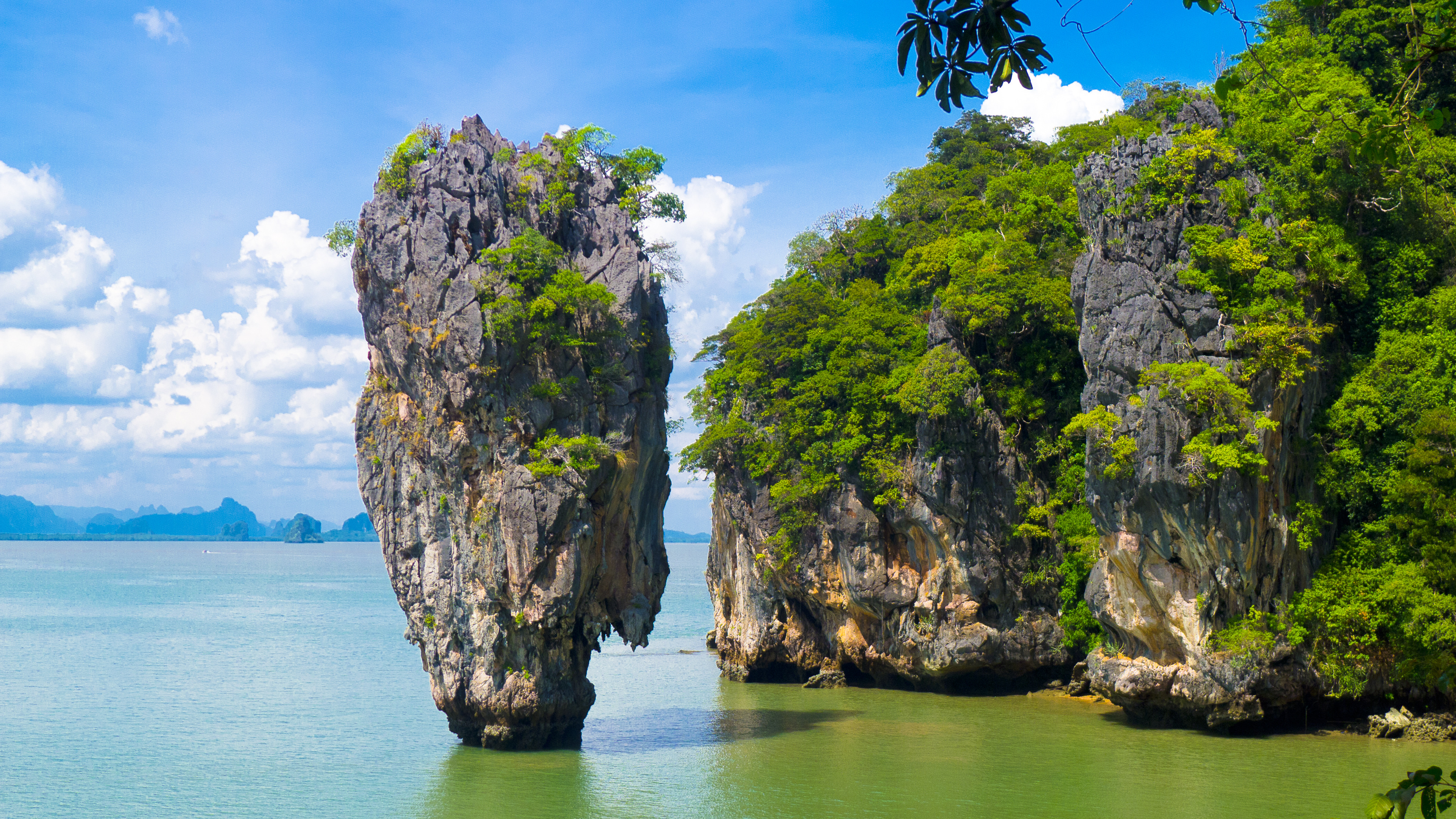 The James Bond Island has turned into the iconic figure of Phang Nga Bay. This is because it is the most fascinating place on the bay. Every touring vessel includes the James Bond Island on their schedule so it is often a busy location during daytime. Another major component the island possesses is a colossal chunk of rock that numerous centuries ago, broke off from the bluff and slid down onto the shoreline, creating a wedge-shaped tunnel (it housed the passageway to Scaramanga’s den in the movie). There is a bunch of ornamental stores down by the shoreline.

Since Phang Nga Bay is a national park, you are required to pay a recreation park fee. Being that all visitors want to see James Bond Island, this is the place the fee is collected. In case you visit the island privately, an entry fee will be collected. If you are on a visit the recreation center charge is added to your visiting fee.

Most Phang Nga Bay guests hope to visit James Bond Island, however, there is a great deal more to appreciate. 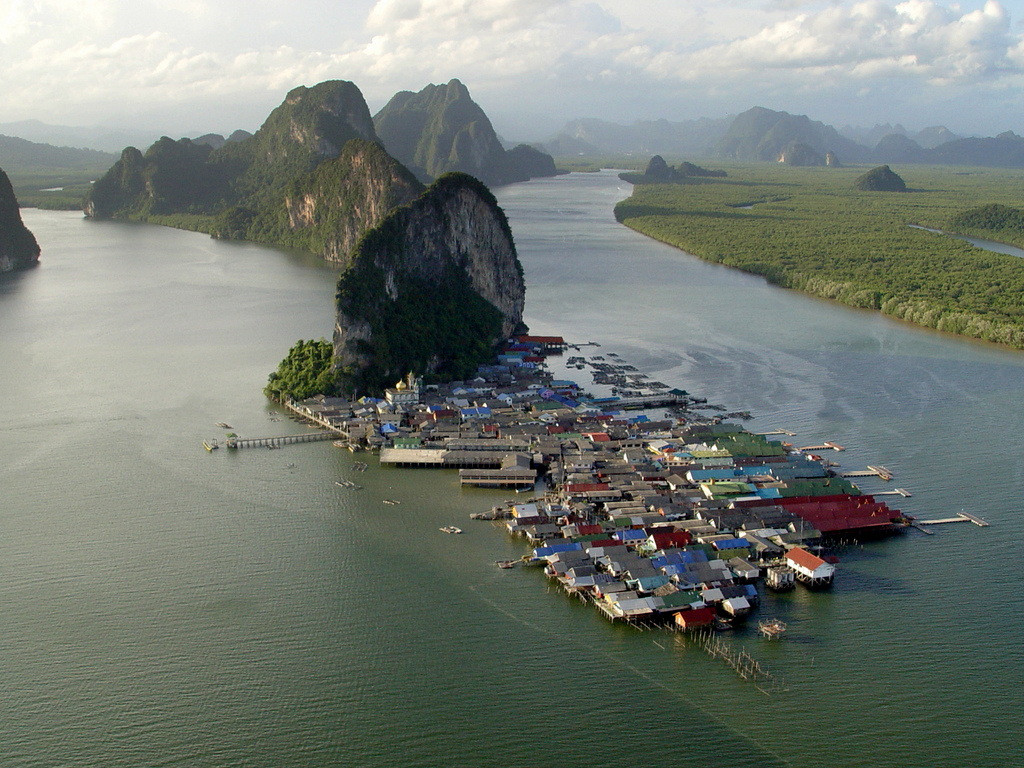 Another popular destination for the numerous boat tours is Koh Panyi’s Muslim Sea Gypsy village. This is a 200-year old community which was one of the first to inhabit the bay. They used stilts to build their village over the water. By day, the boat tours convey crowds of visitors to indulge in fresh seafood and purchase trinkets. When all the boat tours have left, the villagers pack up shop and come back to the fishing village life. A couple of rental cottages are available in the village for the individuals who would like to stay over and see the bona fide village life. (Don’t forget that it is a Muslim community and as such you ought to dress reasonably and cease from drinking liquor). 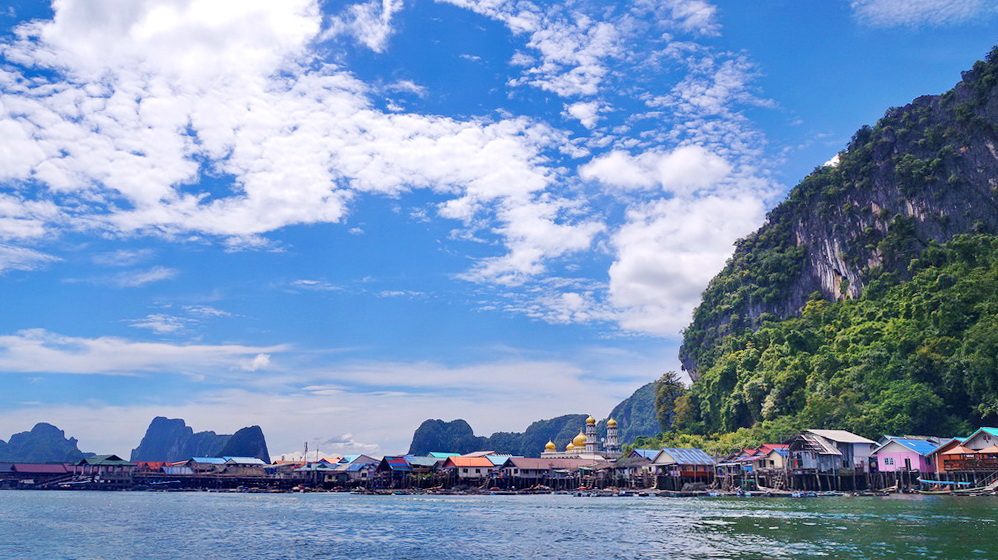 These two are the major spots in Phang Nga Bay. There are many other points of interest in the bay and the tour boats usually include one or two other stop-offs on their itineraries.

There are caves located on most of the limestone islands. Water leaking through the limestone rocks for centuries, has shaped some astounding caves and rock shapes on the islands. A few of these cave walls have fallen to shape an element the Thais refer to as ‘Hong’, which is the Thai word for room. These are fallen cave walls that are presently outdoors rooms on the island, usually containing little tidal ponds. Koh Panak and Koh Hong are two brilliant illustrations of such elements.

In Koh Panak, there is a cave that leads you into the Hong at the center of the island, but can only be accessible at low tide. A light is needed for navigation and ensure to lower your head for the 80-meter paddle through the cave stream. When you break into the light at the island’s center, it is a Jurassic Park sort of venture into a different universe. 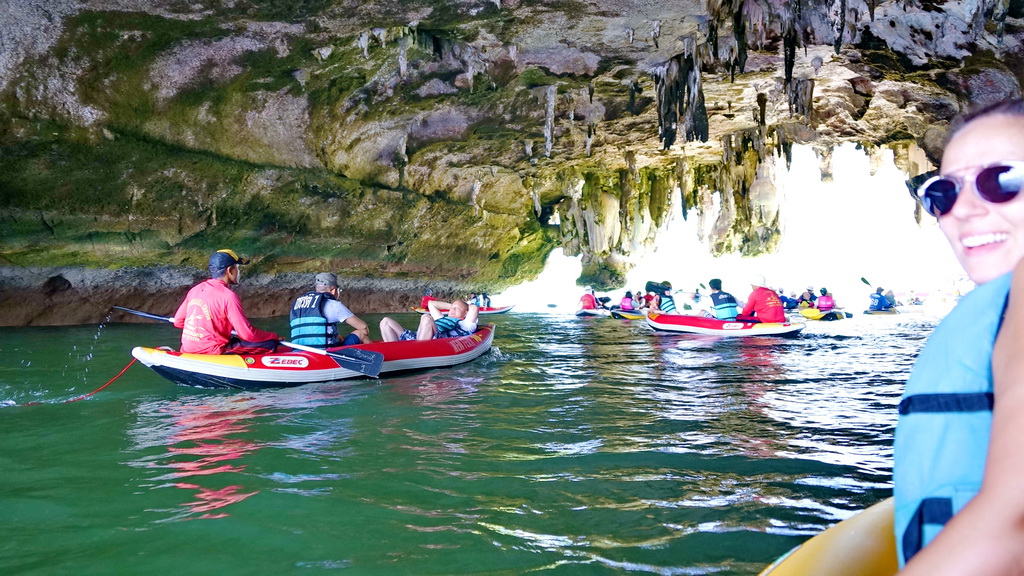 Ocean kayaks can be hired to paddle around a portion of the islands. Once in a while, this is the best way to get a decent perspective of the ‘hongs’. It is an incredible approach to truly value a portion of the dazzling landscape.

There are numerous little beaches covered up all over the islands in Phang Nga Bay. They are not generally great to swim in as the numerous streams that run into the bay convey a great deal of dregs that implies the ocean depths tends to feel a touch grimy and soggy. The beaches are extremely beautiful and are stunning spots for a touch of serenity. They are frequently encompassed by lavish vegetation and sheer bluffs.

The sediment from the streams diminishes visibility thereby making the bay not perfect for snorkeling or diving. Yet, some pleasant spots exist and there are a lot of fishes around.

Phang Nga Bay’s tremendous topography is because of the limestone shelf beneath it. Limestone shapes under the ocean. Over a large number of years, the skeletons of tons of marine living beings tumble to the seabed. In the long run the immense weight of their own weight presses the carbon and calcium down into deposits of solid rock, at times several meters in depth.

Over many more years, the ocean rises and falls, at times uncovering the limestone rock. In the long run, a series of geographical powers breaks the limestone sediments and expose the fantastic rough protrusions that portray Phang Nga Bay.

The limestone sediments that structures Phang Nga Bay really stretch south the distance down through Trang and Krabi regions. This showcases a comparatively staggering view along the coastal stretch, as well as the astonishing Phi Islands. 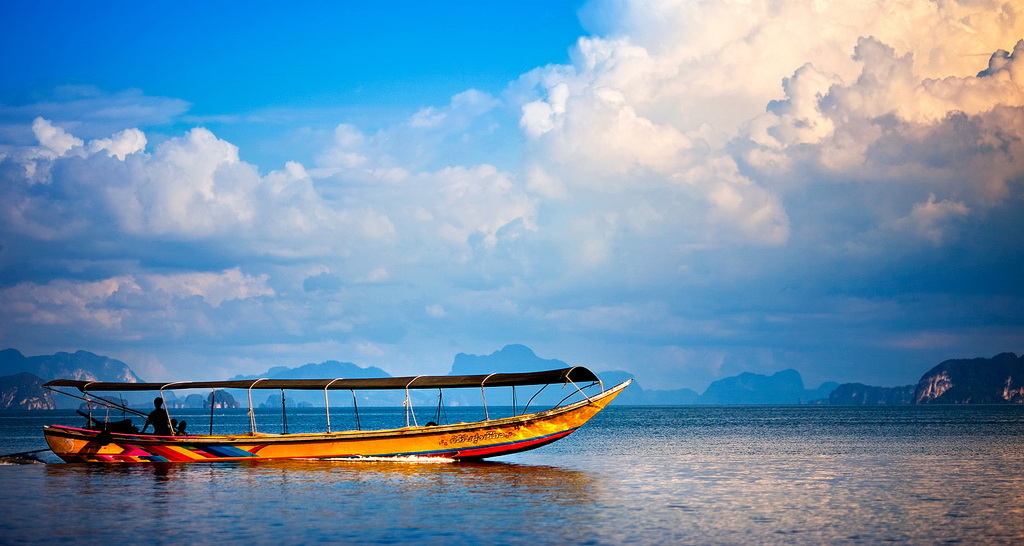 The simplest way to visit Phang Nga Bay is by joining a tour. They are moderately priced, beneficial and include pickups as well. The disadvantage of taking part in a tour is that you are visiting with a group and as such on a limited schedule.

For the audacious individuals, it is highly befitting to rent your own particular longtail boat and a boatman for 1500 to 3500 Baht for a customized voyage through the bay, depending  on how long and what you want to explore.